Being the easily distractable type, I was prompted to take a look at Good OS on the advice of one of my work mates.

It's rather shiny and apple-esque so I thought, why not?

My experience of running Linux distributions in the past is that I've grown up with Basic, MS-DOS and Windows so it takes me far longer to get anything done and there's a greater chance of me screwing up.

First impressions of Good OS is that it's rather easy to do stuff.

Beyond that, the most interesting thing by far is the fact that WINE comes pre-installed. This prompted a light bulb moment so I dropped the program directory for one on my Notes installs into WINE's "C Drive".

Hey presto, instant Notes Designer. I'm now getting closer to being able to throw Windows in the bin. Not just yet though 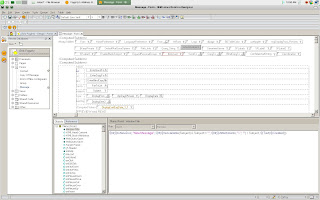 Posted by Chris Fogarty at 1:17 PM